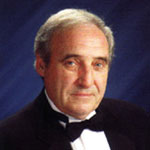 Alan Crabb, Artistic Director and co-founder of the Binghamton Downtown Singers, Inc., led the group from 1983 until his untimely death in September 2012.

A gifted singer himself, he was well known in both local and national music circles. As a conductor, he was known for his ability to inspire the musicians under his baton to the highest levels of musical excellence, a fact repeatedly confirmed by the favorable responses of audiences and critics alike.

He appeared with many of the major orchestras of North America, including those of Cleveland, Pittsburgh, Buffalo, St. Louis, Denver, Seattle, San Antonio, New Jersey, and Vancouver, Canada, as well as in San Juan, Puerto Rico. A graduate of the Crane School of Music in Potsdam, New York, he was a vocal and choral teacher in this area for many years. He taught voice at Carnegie Mellon University, Cornell University, and Broome Community College, and was a guest lecturer with the Cleveland Symphony Orchestra.

He was a gifted musician, teacher, and conductor; an inspiration to all Downtown Singers who performed with him. We mourn the loss of his presence and influence.

Alan Crabb’s passing was made even more tragic because it occurred just before rehearsals started for our 30th anniversary performance of presenting Handel’s Messiah at Christmas. Instead of preparing to celebrate, the choir was grieving.  Bill Lawson, the choir’s accompanist at the time, stepped up to the podium to lead rehearsals and make our 30th anniversary performance a reality. The choir is grateful to Bill for making it all possible.

In the meantime, the Board of Directors initiated a nationwide search for a new music director. After a lengthy search, and several interviews, the Board offered the position to Marisa Crabb, Alan’s wife.  Marisa accepted, and the choir began a new chapter.

Marisa brought her own unique style and determination to rehearsals and the choir responded. She focused on refining the choir’s sound without sacrificing the “no audition needed” policy. The Binghamton music community noticed, giving Marisa the opportunity to forge new collaborations.  In 2015 The Downtown Singers were invited to join the Binghamton Philharmonic for their annual Home for the Holidays concert. That was such a success that the Binghamton Philharmonic became the Downtown Singers orchestra for the annual Messiah performance for several seasons. Marisa has also collaborated with other choral directors to help develop and refine the Singers and to expand their repertoire.